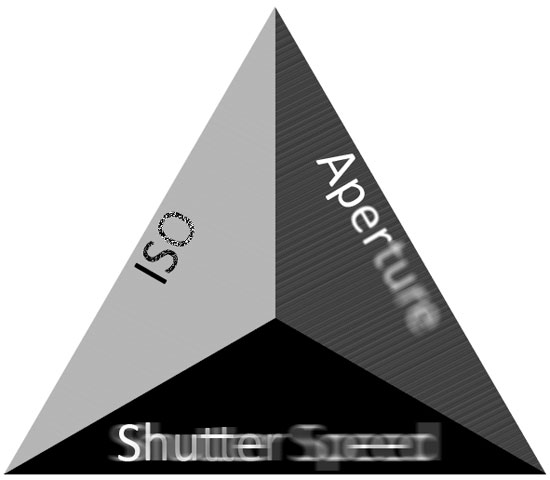 Step 1: What is Exposure?

What Happens When You Take A Photo:When you take a photo, you are recording a moment of light.

Exposure is the heart of photography – it is the technical process of recording light. To understand exposure, you must understand what photography is. What are you doing when you take a photo? What happens when you press the shutter button on your camera?

You record light by “exposing” the “recording device” of the camera (film, imaging sensor) to light. The total amount of light that is recorded is dependent on three key factors: how much light is recorded, how long is that light exposed and how sensitive is the recording device to that light.

In photography, these three key factors make up what is referred to as the exposure triangle and are the three main principles that constitute the exposure process:

Let’s take a closer look at each of these three components.

What we mean by sensitivity to light is that, all other variables being equal, the total amount of light that is required to properly record an image.

You can see how you can make use of this in your photography. For example, in lower light situations, you can increase your ISO to get a good exposure.

Shutter speed is perhaps the simplest of the three concepts to understand and refers to the duration that the light is recorded onto the recording device. In other words, how long is the light allowed to stay on the film or imaging sensor. This can range from thousands of a second to hours.

As you can probably tell, the slower the shutter speed, the longer the recording device is exposed to light, and  all variables being equal, the less light is needed to record an image.

In our analogy above, aperture is how much light is being recorded onto the recording device. The term “how much” can be a bit confusing. To give you a better understanding, think of aperture as representative of the “flow of light” that is being recorded.

Now for the more confusing part about aperture. In photography, aperture is represented as an f-number, typically known as an f-stop. This ranges from f/1.0 and below to f/22 and above. What is confusing is the inverse relationship between the f-number and the aperture.

What this means is that if you have a smaller f-stop, you have a larger aperture (diameter of opening of the lens), you will have more light flowing onto the recording device and therefore, need less time to expose the image.

If the above statements are confusing to you, please re-read them to make sure you understand what the interplay that is going on.

Step 5: Putting it all together, the Exposure Triangle 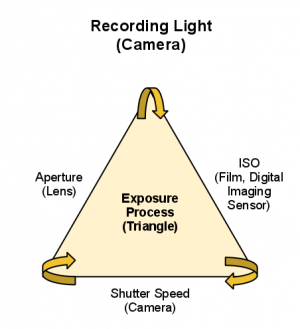 The Exposure Triangle: Is the interplay between ISO, Shutter Speed and Aperture.

The exposure triangle is the relationship between the three components of exposure: ISO, shutter speed and aperture. As you can tell, changing one aspect of exposure induces a change in one or two of the other aspects. There is an interplay between ISO, shutter speed and aperture. The more comfortable you get with these three components, the more you will be able to control the quality of your photos.

An example might help to clarify the relationships of the exposure triangle. Imagine we want to get a good or “proper” exposure of a particular subject. Now imagine that this is a controlled shot, so that the only variables we can change are the ISO, shutter speed and aperture. All other variables remain constant.

See if you can make out other relationships for yourself.

If you understand the principles explained so far, you may be thinking there are other ways to control the total amount of light that a recording device gets “exposed” to besides with just ISO, shutter speed and aperture. You are correct.

The other side of the equation is to control the incoming light itself!

Lighting is a whole other aspect of photography that we will explore in future tutorials.

The Exposure Process: In photography, the recording of light is the exposure process which is necessary to convert incoming light into a photo.